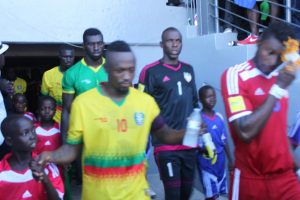 When Head Coach James Debbah made public his list of Internationals to face Tunisia in the crucial African Nations Cup qualifier, notably absent was the player that give Debbah his biggest win.

LFA President Musa Bility at a hastily convened news conference at the Blue House in Monrovia this morning said “ goal machine Francis Grandpa Forkey Doe is part of the Lone Star squad for the crucial 2017 Africa Cup of Nations qualifier against the Carthage Eagles of Tunisia. Mr. Bility noted that Grandpa and other key players will not play the friendly with Morocco, but will fly straight to Tunisia “

Liberia is tied om 10 points with Tunisia in Group A but the Lone Stars top the group with a better head-to-head record after defeating Tunisia 1-0 in Monrovia last year, from the strike by Grandpa Doe.

Speaking to Liberiansoccer.com via phone from his base in Malaysia, the Present leading scorer and reigning golden boots winner in the Malaysian Premiere league, Francais Grandpa Doe confirmed the receipt of the ticket to Tunisia.

Grandpa said” The coach has his plans and his tactics. I do not want to cause any problems with the team spirt ahead of the important match”

He further said “The call up from the LFA president is Great and I always honor Liberia call to duty, but the coach is the one that makes the final decision on who plays.”

Me coming into the team will not be good for team unity and chemistry, Coach Debbah can choose to not even dress me for the match and I am sure he will not play me because I do not fit in his plans for this game.

After speaking to my family and teammates, I have decided not to cause any problems and will remain on base cheering Liberia to victory.

Liberia will be without the services of a prolific scorer and inform striker at this important juncture in our quest for African cup glory.